Blockchain Trilemma – How to keep 3 key factors of Blockchain balance

Blockchain Trilemma - How to keep 3 key factors of Blockchain balance 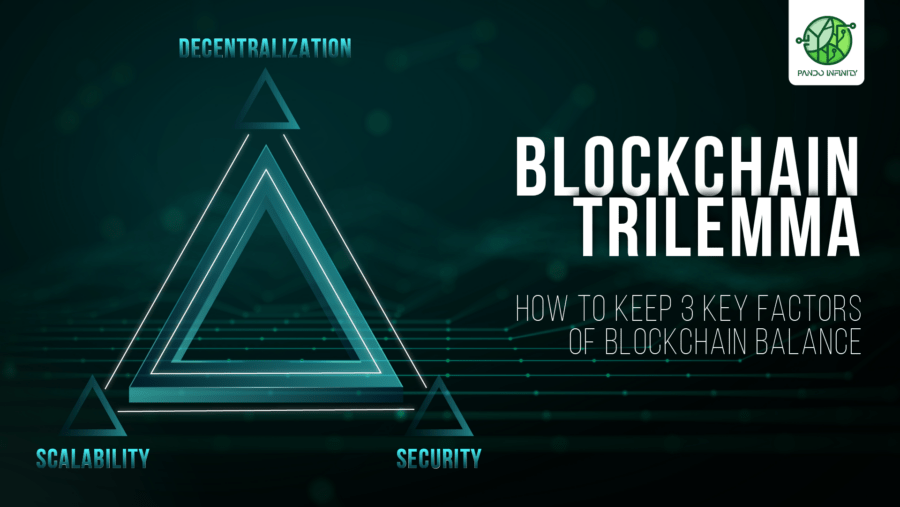 Decentralization, Security and Scalability – three key factors of blockchain, also known as blockchain trilemma – appear to seek a coexistence but turn out to be impossible if living in harmony.

What is Blockchain Trilemma?

“Blockchain Trilemma” was coined by the co-founder of Ethereum, Vitalik Buterin. Basically, it’s a triangle including 3 features: Decentralization, Security and Scalability. If you struggle to keep a social life, work and sleep balance simultaneously, then Blockchain Trilemma is the same. It is widely accepted that blockchain can only provide two out of three benefits at once regarding the 3 factors mentioned above. So let’s find out the way to keep this “Impossible Trinity” balanced as much as possible.

What is Decentralization in Blockchain Trilemma?

What is Scalability in Blockchain Trilemma?

The scalability of the blockchain protocol refers to basic factors such as transaction processing speed, network throughput, etc. Blockchains experiencing network traffic when the number of transactions increases is a manifestation of a lack of scalability. Of course, greater scalability is possible. However, we have to make trade-offs in terms of decentralization, security, or both. At the moment, scalability is the most obvious fundamental factor for blockchain networks to compete directly with each other. A lot of blockchain platforms were established based on Decentralized and Security. Achieving scalability without sacrificing security or decentralization is a major challenge for today’s leading decentralized networks.

What is Security in Blockchain Trilemma?

Security is essential for the efficient operation of cryptocurrencies and blockchain networks. All information on the network is accurate and uninterrupted with a high level of security. To improve the speed and throughput of a blockchain network, it can be effective to reduce the number of nodes on the network, either geographically or numerically. However, a more centralized network has less security because fewer computers are working to secure the network. This makes centralized blockchains more vulnerable to attacks. Therefore, in blockchain, more nodes mean more security.

What is the “perfect couple” among these three?

One of three factors – Decentralization, Security and Scalability – must be sacrificed to pave the way for the successful implementation of the other two. It can be seen that blockchain and cryptocurrency mostly rely on decentralization because it reduces the need for third parties to participate. Let’s take a look at an example of traditional finance. A bank is centralized and plays as an intermediary between you and your money. Its responsibility is to provide a secure mechanism. Blockchain, which is based on system rules, will give direct access. Each transaction must be validated by more than half of the network’s nodes. The more nodes, the more decentralized blockchain becomes. But one disadvantage arises, transaction time can be lengthy and the system is difficult to scale due to the enormous volume of required data to maintain the shared system.

On a blockchain, when adding more and more information, the data will become heavier thus moving slower. It is quite difficult to keep up with the latest information and solve cumbersome data simultaneously. As a result, we need to set a limit for a widespread network. But is this an effective solution if it lowers the barrier for attackers to take the network at the same time? We can see that the road to mass adoption of blockchain needs to include scalability. If we want a blockchain platform alternative traditional platform, convenience, speed and accuracy are critical.

Blockchain Trilemma has existed for a long time since blockchain technology developed. Therefore, solving this problem is unlikely to happen overnight. Currently, there are a number of different solutions that have been developed or are in the process of being developed.

Ethereum Consensus Layer is an upgrade to the Ethereum blockchain with a view to enhancing the Ethereum network’s speed, efficiency, and scalability so that it can handle more transactions and alleviate obstacles. While Ethereum 1.0 uses a consensus mechanism known as proof-of-work (PoW), Ethereum 2.0 will use a proof-of-stake (PoS) mechanism. Although PoW is highly secure, the transaction processing speed is limited. While PoS is much faster, and it also uses significantly less.

Sharding has grown in popularity as a way to expand projects like Ethereum that don’t rely on a third-party network. Sharding will split the Ethereum blockchain into 64 parallel chains that will work together to process transactions. This means that more transactions can be processed simultaneously without causing congestion. Because the various shards interact with one another and send data to the main blockchain, security is maintained.

State channels allow for two-way communication between different blockchains and off-chain transaction channels, thereby minimizing processing time since there is no third party involvement. This is considered a solution that sacrifices a degree of decentralization to achieve greater scalability. Only the opening and closing information are sent to the main blockchain once the transaction is completed. Security is maintained because state channels are controlled by smart contracts.

To sum up, during the development of blockchain, the harmony between decentralization, security and scalability is a difficult problem for developers. Despite the fact that many people do not know about Blockchain Trilemma, they are aware of the issues it poses.  If projects can effectively address the trilemma, the road to mass adoption of Blockchain will be shortened. In the future, if a way to achieve decentralization successfully – without concern about fragile security and limited scalability – is found, the potential of Blockchain is shining bright than ever before. Rather than relying on a traditional, centralized, and regulated system, blockchain provides a more fair, more level playing field for individuals to thrive.

Hope you already have a basic knowledge of Blockchain Trilemma as well as an understanding of the “Impossible Trinity” of blockchain!

7 steps to take advantage of opportunities in the Metaverse