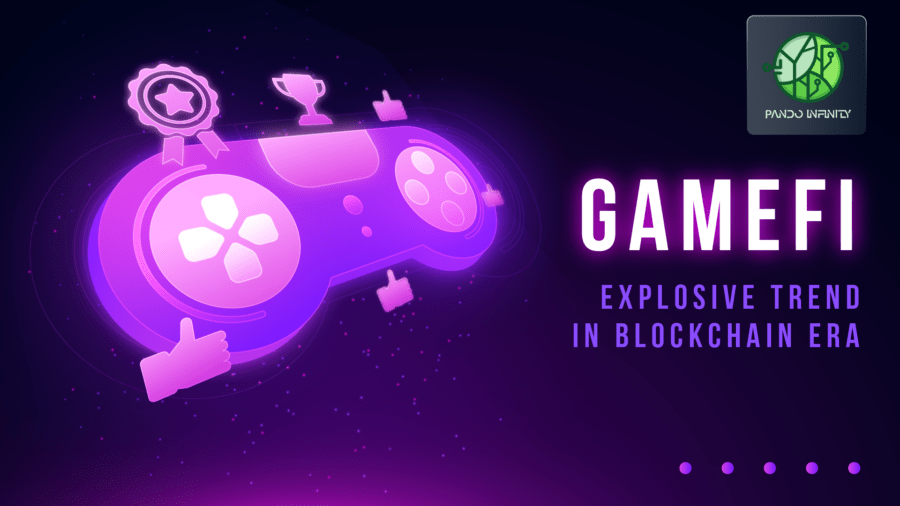 Today, the gaming industry is predicted to surpass $200 billion by 2023. Meanwhile, cryptocurrency is constantly evolving and expanding. With such a huge market share coupled with the versatility of cryptocurrencies, the combination of two trends to create GameFi is inevitable. With the amazing appearance of GameFi in 2021, many blockchain game services have been launched, facilitating the huge capital inflow into this industry.

GameFi is a term that refers to the combination of Decentralized finance (Defi), Non-Fungible Token (NFT) and video games (online games) based on the blockchain platforms.

Unlike traditional online games, GameFi works on a mechanism where players will upgrade versions to receive advantages in the game. Referring to GameFi, it is impossible not to mention the “Play to Earn” model. This factor has helped players earn a passive income through playing the game. In other words, gamers have now partly received a reward commensurate with the time and effort they put into the game. It has had a visual innovation and appeal that resonated with gamers all around the world. As NFT transactions continued to explode, the GameFi concept transformed into NFT-based games that reward players with real-world monetary incentives.

“GameFi” gradually gained popularity in 2020 by the founder of Yearn.finance, Andre Cronje. It then combined with cryptocurrency to evolve from purely in-game tokens incorporating DeFi. With its massive growth and popularity, GameFi is proving its importance and stable position in the crypto industry. In the past, the first GameFi applied Bitcoin blockchain technology, but because of high transaction fees and low transaction speeds, it did not meet the development needs of Game-DeFi concept. Since then, the Ethereum smart contract was born to follow the Bitcoin blockchain. Game publishers used Ethereum extensively and the platform is still popular today.

Virtual assets in the game such as avatars, lands, costumes, weapons, equipments, items, gems, tokens and pets will all be represented as NFTs. Players will receive these assets through gaming and can profit by trading them on the NFT marketplace or exchanging them for crypto and then converting them to fiat. Depending on the type of GameFi, players will receive profits based on different games. Some common features of current blockchain game platforms include:

Play2Earn allows players to earn in-game assets. However, unlike a normal game, these GameFi funds can be transferred to the physical world through cryptocurrency transactions. By participating in the game’s ecosystem and using their native currency, players benefit developers and other players. The more popular these games become, the higher their value becomes. Meanwhile, the more items a player earns in the game, the more coins they can sell. The profits received mainly come from a reserve of native tokens stored in the smart contract.

GameFi is a combination of Game and Fi (in DeFi). Therefore, it would be a big mistake not to mention DeFi’s features. Some outstanding features besides Play to Earn include staking, yield farming, liquidity mining, etc. These features will help players receive a certain passive income. Basically, with DeFi, users can generate the number of tokens they have in the easiest way.

Compared to traditional games, this is a significant new point of GameFi. Digital asset ownership of players’ own NFTs has created unprecedented economic opportunities. This is also a concept that many players are interested in, and is one of the focus of attention when it comes to GameFi. NFT is used to call both digital and physical assets, including in the virtual world and in real life.

For example, in WidiLand – A farm-based GameFi which was launched in 2021 – players can create a whole new NFT from 2 former NFTs in their account. These new NFTs can be sold to other players then these are completely owned by them.

As mentioned above, the first GameFi titles were mostly built on the Bitcoin blockchain. However, the need for expansion does not allow them to continue growing on this blockchain. Therefore, later GameFis were built and developed through dApps to meet the needs of today. Ethereum also no longer holds its position as before because of high transaction fees. Some ideal names that can replace Ethereum such as Solana, Wax, Polygon, BSC, Polkadot, etc.

Most GameFis are free on multi-devices to download and do not require players to deposit money to start participating. This has helped GameFi reach closer to players than traditional games. Only a handful of games have special entry requirements. However, this cost will also help players make a profit after a while.

The potential of GameFi

Currently, GameFi interested many investors and players. The integration of NFT into the game has contributed to the popularity of GameFi showing a lot of potential beyond the limits of traditional games, delivering a better user experience than ever. So it’s no surprise that the top blockchain games have surpassed a market cap of more than $14 billion in a short time. In addition, game blockchains are easily scalable as they do not require hardware or large capital investment to participate in the project. Users can easily join the GameFi world with their mobile phone, tablet or PC. As a result, GameFi offers more use cases for the cryptocurrency and the NFT gaming space, making it very potential. According to crypto investment firm Grayscale, the GameFi market share could grow to $400 billion by 2025 from $180 billion in 2020. With the parallel development of Metaverse, analysts expect that GameFi will take advantage of breakthrough technology advantages such as AR / VR virtual reality, XR augmented reality, … and many other technologies.

GameFi is still in its early stages and has proven its huge potential in the long term. Let’s look forward to seeing how far NFT will go.

What is Business Intelligence? Why it is important?
TAGS : Blockchain gamefi