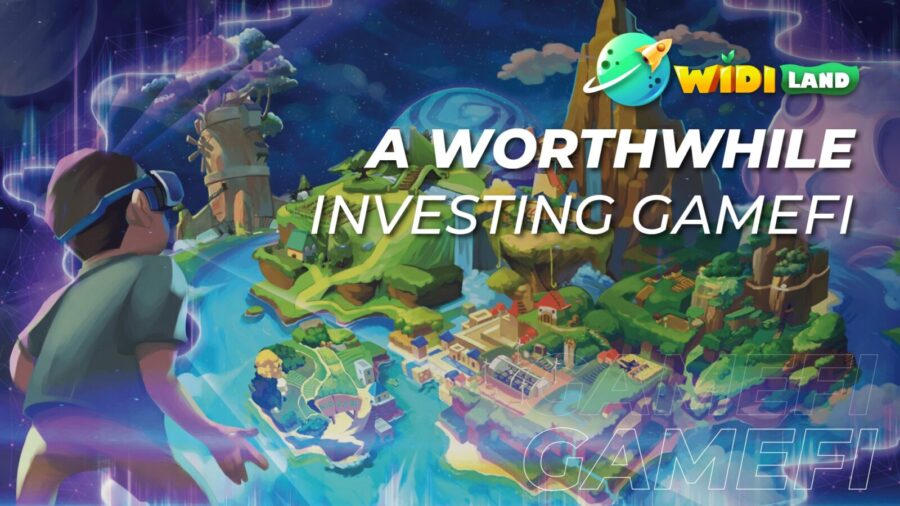 The Play-to-Earn game trend has grown explosively in 2021 with many prominent names like Axies Infinity, BombCrypto… And it is impossible not to mention WidiLand – A bright star with a lot of records in the Crypto market. Officially launched at the end of 2021, WidiLand – a #freetoplay and #playtoearn game – attracts a lot of attention from Game Fi communities all around the world. WidiLand is considered one of the most worthwhile investments when continuously releasing new features despite the bear market.

In terms of Metaverse booming, WidiLand is a new world exploration and construction GameFi with promising aspects. In the context of an isolated planet with limited resources, players will become pioneers to set the first footprints, starting the journey to build a new life. WidiLand opens an account registration so players can become the residents to experience amazing in-game features.

A unique feature of WidiLand is the way the plot develops in stages:

Chapter 1: Journey Begins! The crew begins to build a new life on TKE-1012.

Chapter 2: Devastation, the inhabitants of Widi must defend themselves from the threatening invaders.

Chapter 3: The New Era, with their efforts, the people of Widi have reconnected with the Space Station to continue the project and plan to bring humanity to a new home. This is also the beginning of the Metaverse.

After 2 months of launching the Official Game version, WidiLand has supported users on multiple platforms: PC, IOS and Android. This is evidence of the efforts of the development team and technology implementation with the goal of giving players the best gaming experience.

Download and experience the amazing features of WidiLand right here:

Thanks to impressive numbers when WIDI and WSO are listed on PancakeSwap (reaching the Top Trending ranking on Dextool, CoinMarketCap and Coingecko), WidiLand is proving the project’s growth potential in the long term.

There is a total supply limit of 400,000,000 WIDI which can be used for NFT transactions from the Marketplace, Staking and many more activities to earn interest. Users can get WIDI with BNB (Binance Coin) by using PancakeSwap which is the most secure decentralized finance protocol on the Binance Smart Chain. A unique feature of WidiLand is decentralized lending and borrowing without either party needing to identify themselves. Borrowers can leverage WidiLand’s NFT assets as collateral; should they not repay the loan, the lender automatically receives the NFT.

This token can be earned through numerous activities such as Daily Quests, Leaderboard, Special Events, etc

In the context of 2130, the Earth is seriously polluted and is in danger of extinction. A group of scientists in the WIDI Project, a high-level program searching for life in outer space, find TKE-1012, a green-blue Earth-like moon. This giant planet, 24.2 light-years away from Earth, has conditions almost similar to our world, up to 73%. They migrate to TKE-1012 and call it WidiLand. Unfortunately, during the landing process, Geomagnetic storms from the efficient exchanges of energy continuously sweep through, causing severe damage to the entire spacecraft, high-tech equipment, and telecommunications. A small group of elite people is selected to participate in this secret program with a unique mission “Finding a new home for humanity.” Through this project, WidiLand team wants to convey a humane message: Let’s join hands to protect the environment and ecosystems on Earth from today.

With the meaningful message, friendly graphics and amazing challenges – WidiLand promises to become one of the most invested NFT GAME series in the future!

When entering WidiLand, players will have 3 default characters (Non-NFT): Farmer, Breeder and Cook respectively. They have different characteristics and take on different missions in the game. The characters all have an in-depth job skill system, which is the key point that makes the game attractive.

There are 5 different rarities:

Similar to Character, when entering the game, the player will receive default cropland (non-NFT). There are a total of 6 types of land with rarity ranked in order:

Like a miniature farm, in Chapter 1: Journey Begin – players will experience 3 characters with 3 different functions (Farmer, Breeder and Cook) and a series of exciting activities in the game for players to experience to the fullest such as Cultivating, Breeding, Cooking, Collecting items, Completing orders, Daily tasks. Through these above activities, players can earn mWSO as well as EXP to upgrade their game experience, unlocking many new features.

​​With simple gameplay and friendly graphics, players can easily play the game with family and friends without having to spend too much time learning how to play. And every month, WidiLand will organize many Leaderboard events with extremely attractive rewards, promising to give players a great experience.

Let’s take a look at a demo of interesting activities at the Official Game version of WidiLand here: https://www.youtube.com/watch?v=Y-Pu6FR-HKE. There are many other interesting activities being cherished by the WidiLand team for the following updated versions. Join the group WidiLand Community to update the latest information about this potential GameFi project!

A well-planned project with long-term goals

In order to build trust as well as maintain the companionship of the community, WidiLand always has a plan to respond to unexpected incidents or fluctuations of the Crypto market during game development. Besides eye-catching graphics and simple gameplay, these factors above are also the characteristics that gamers and investors decide whether WidiLand is a project worth investing in or not. WidiLand team has built a specific and transparent development roadmap to ensure the reliability of the long-term project. WidiLand has long-ranging plans stretching to 2024 for the development of the game and the DAO, in which players can affect gameplay decisions.

From the earliest stage, user experience is the top priority of WidiLand. Widiland has an experienced team in the Crypto market and Game Fi, with a view to targeting multiplayer, rather than a specific group of customers.

Although WidiLand has only been established for less than half a year, the number of partners has reached 40. Some prominent names in Crypto industry such as:

Until now, WildLand all official channels have attracted a total of more than 400,000 followers. This can be considered an impressive number for a Crypto project.

WidiLand is one of the few NFT series with humanistic meaning, a friendly interface and is suitable for all ages. Regarding positive news from tokens and NFT price, WidiLand has also been and is the GameFi project that is considered to have the most explosive potential. Don’t hesitate to try the mainstream product of Pando with a lot of financial opportunities.